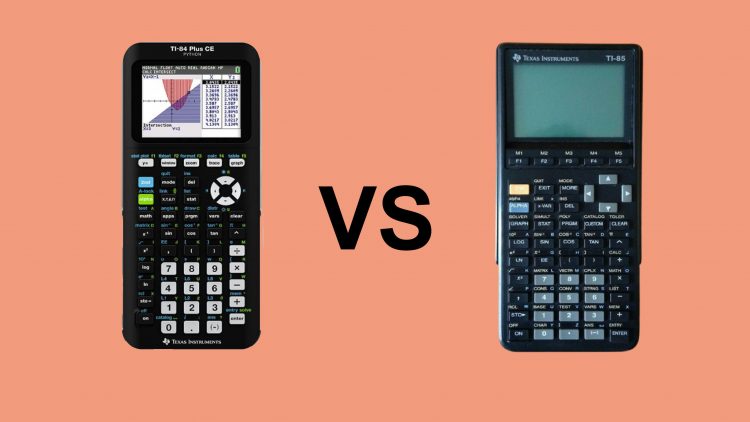 Ti is a well-known brand in the world of calculators. It offers a wide range of problem solvers, each having its own area of specialization. The problem here is to choose the right one among them. One hasty decision would not only waste your money but also lose your trust in a particular manufacturer. In this article, we will try to contrast and compare the important features of these two calculators ti-85 and ti-84 plus.

Hopefully, the effort made in this regard will assist you to opt for the one as per your requirement.

So here are the main differences between both of these calculators:

The product was launched back in the ’90s as Ti’s second graphing calculator. Not only can it cater to the needs of the students majoring in engineering and calculus. But it works really well for those having a hard time in basic calculations of math, statistics, and science.

Equipped with graphing capabilities, the unit is loaded with up to 99 defined graphing functions. It helps you to plot and analyze parametric equations and polar equations simultaneously. It can also compute differential equations.

The unit is able to solve some trigonometric functions like cos, sin, tan, and cotan.

It comes with the Zilog Z80 6 MHZ processor that returns the output within a limited possible time.

The unit has a wide display of 8 lines long and 21 characters wide. Such a huge display omits the need to scroll the screen while entering and analyzing data.

It has 28K RAM which makes it faster enough to perform the operations.

The I/O port designed helps you to create a connection with other compatible devices such as Ti-86 and ti-85 models.

It is powered by four AAA batteries with a lithium battery backup. And it has one year warranty.

It is among the advanced versions of Ti calculators. it was launched back in the 2000s. Ti- 84 plus is an ample device for those entering their high school all the way to advance level studies. All the features of ti-83 have been accumulated in this mighty machine.

Ti 84 plus supports all the apps of Ti models specifically Ti 83. The device is armed with incredible features like math print, science tools, interactive geometry, calculus, statistics, and probability and regression analysis. It also has upgraded graphing technology.

Unlike ti-85 the unit has an upgraded processor of Zi log Z80 15 MHZ with 128 KB RAM, which provides it enough space to run the programs swiftly.

Furthermore, its better programming capability can be analyzed by the fact that it has a built-in assembly language. This property makes it easier for the user to manipulate or design the programs of one’s own choice.

What makes it different from its predecessors is it can work with expressions. Its math print technology enables you to insert the equations along with their expressions in proper math format.

Among its pre-loaded apps graphing is one of the vital functions the unit offers. Advanced technology has been used in order to plot the graph including conic graphing and inequality graphing etc.

The split-screen function previews the equation, its graph, and the coordinates. At the same time. Along with that one can navigate to any point on the graph.

What gives it an extra edge is that it can entertain the negative of complex numbers also, which the previous models were unable to compute.

Similarly, the design is sleek and handy. It is powered by four AAA alkaline batteries.

One silver oxide battery is also included in order to back up the data in case of battery failure.

For better connectivity, the device has an I/o port along with a USB port that makes the transfer of data easy.

Comparison of Ti-85 with Ti-84 Calculator

Ti-85 was introduced by Texas Instruments in the 1990s as its second graphing calculator. Whereas Ti-84 plus is the latest model of calculators launched back in 2003.

Is there any major difference in the working of these two versions?

A yes, Ti-85 is specifically designed for the basic level calculations of engineering and calculus. The graphing functions provided by this device are limited and obsolete.

However, Ti-84 is equipped with advanced graphing technology. Moreover, it is flooded with the essential features to compute math, statistics, calculus, trigonometry, algebra, differential and integral equations, etc.

To conclude, Texas instruments provides a wide variety of calculators. In this article, we’ve compared the Ti-85 VS Ti-84 calculator. It is now evident that Ti-84 plus is a lot better model than the latter.

It comes with interactive features of math, science, statistics, algebra, calculus, and graphing. The only feature that makes Ti 85 a considerable unit is its wide display. No matter Ti 84 plus is a little bit more expensive than its predecessors, however, we bet that choosing it will never regret you buying it.