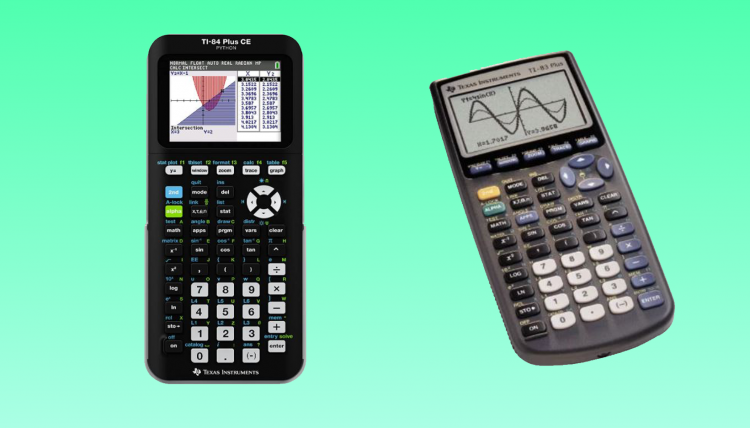 Texas instrument is one of the leading brands dealing in electronics. The company is competing hard to gear up the devices equipped with advanced technology. Considering the customer’s demand TI comes with a wide range of calculators. However, it is equally difficult to differentiate among these calculators having almost the same appearances, names, and functions.

In this article, we will try to compare and contrast one of the two most recommended models -launched by TI: Ti-83 plus and TI-84 plus.

Similarities between ti 83 plus and ti 84 plus

Both the devices have a resolution power of 64 × 96 that enables it to show 16 characters per 8 lines. Such a wide display allows its users to use multiple functions simultaneously. This property also makes them superior over other advanced models launched by Ti. As even the modified versions with upgraded software lack such a wide display.

Both the units have split-screen.  This feature allows the user to evaluate tables and analyze graphs simultaneously.

Both the calculating devices have enough RAM of 24 kb to support the apps and process calculations swiftly. However, data could not be backed up in case the battery runs off.

Both ti 83 plus and ti 84 plus are non-rechargeable devices and are powered by four AAA batteries.

Both the devices have some graphing capabilities. They can plot up to 10 graphs in 6 different styles such as scatter plots, histogram, XY-line plots, and probability plots, etc

Both the products are approved for standardized tests such as ACT, SAT, PSAT MATH AP ETC.

Differences between ti 83 plus and ti 84 plus

The difference becomes evident when one compares the permanent storage capacity of these two computing devices. To permanently store data the ti 83 plus has 160 kb ROM whereas ti 84 plus has 480 kb of Random Access Memory.

What makes these two devices different is their power to process the data. Ti 83 plus comes with a processor of 6MHZ while ti 84 plus has a processor of 15MHZ. The powerful processor of ti 84 plus works two times faster and returns the output efficiently if compared with ti 83 plus.

Ti 83 plus being an older version does not support any software upgrade. The device is compatible only with 21 built-in applications.

While Ti 84 plus has a USB port i-e it supports communication between devices. It accepts software upgrades and works with 33 applications.

Being the advanced version ti 84 plus has more advanced graphing and mathematical functions. Ti 83 plus when compared with its predecessor has less advanced functions. MATH PRINT is what ti 84 plus is well known for. This technology helps the students to concentrate by enabling them to enter the fractions and equations in proper math format.

Ti 83 plus has no USB port, therefore the user cannot transfer data nor does it go to any software upgrade. On the other hand, it is one of the prominent features of ti 84 plus that it has a USB port. The users can easily share and transfer their data when attached to a computer. Moreover, this feature also welcomes the new software’s introduced by Ti.

The feature that catches your attention first is no doubt the price of the article. Well, ti 83 plus is economical in price and is much cheaper than ti 84 plus.

Things  to consider while buying ti 84 plus

Ti 84 plus includes all the ti 83 plus apps. It also has pre-loaded features for inequality graphing, inter-reactive geometry, and is ample for calculus, algebra 1, and 2.

Ti 84 plus comes with prompts to enter the data which the successor version does not have.

The device consists of a language localization app that has the ability to translate English into various other languages including French, Italian, German, Spanish, etc.

It is an excellent device for calculus. As there is a need to draw and compare multiple functions simultaneously. This one works aptly for such computations.

Things to consider while buying ti 83 plus

This is an older version of Ti. Yet still, it is one of their best-selling products. The unit provides a bundle of functions under such an economic price.

It is an excellent device for those dealing with general calculations of math, sciences, trigonometry, economics, etc.

It can efficiently handle problems of probability including dice rolling and flipping.

This app helps you to store formulae and other information on your device for later use.

Just like its brother device Ti 84 plus, Ti 83 plus is able to perform inequality graphing. The user can draw and locate the intercepts on the graph easily.

It has a periodic table installed in it. it is helpful in  Standardized tests like the ACT, AP where questions regarding elements of the periodic table are often inquired.

Are these two models allowed for standardized tests?

Yes, Ti 83 plus and Ti 84 plus calculators are allowed for tests like AP, ACT, PSAT, AND SAT.

Does TI 83 PLUS and TI 84 plus vary in their functions?

Yes, both Ti 84 plus and Ti 83 plus differ in their functionality. Ti 84 plus being the advanced version comes with all those apps present in the previous model Ti 83 plus. It is best for advanced computations of algebra, calculus, trigonometry, graphing, and probability.

On the other hand, Ti 83 plus is specifically designed by considering the fact that it can resolve the basic level problems of math, science, trigonometry, and algebra. Although it is a graphing calculator, yet has limited capacity to analyze graphs.

To conclude both ti 83 plus and ti 84 plus are the bestselling gadgets of Texas instruments. In order to leave no confusion, we have compared and contrasted the features of both devices.

Ti 83 plus deals with general and less complicated calculations and is cheaper than ti 84 plus. At the same time, it lacks many advanced functions required by the students entering into advanced level studies.

On the other hand, ti 84 plus is the modified version equipped with advanced technology. Well, it is emphatically true that the unit costs you some extra money, but we can bet that choosing this device will never end u regret your decision.